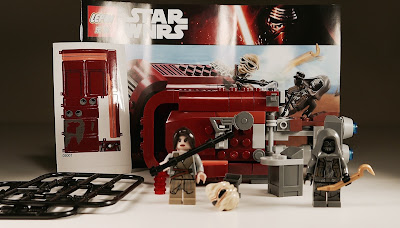 When I say almost, it’s because the hairpiece for the Rey minifigure isn’t the same as the original Lego set.   Also, this set doesn’t come with a shoulder bag for Rey.   Other than those two differences, the brick colours and instructions are identical to Lego.

As is expected, this Lepin set comes together nicely.  You get 206 pieces (according to the box design), a sticker sheet and two sets of guns still on their plastic trees.  You get the Rey minifigure in Jakku desert garb, head scarf and staff.   As I mentioned earlier, she also comes with a hair piece but it’s a long ponytail.  I guess the bootleggers decided that the new triple bun hairpiece wasn’t worth producing.  Also, no shoulder bag either.

You get Unkar’s thug minifigure with the set.  He comes with a crowbar.   Mine came with a missing hand, but luckily I have a lot of them so this was easily replaced.  The BB-8 minifigure pictured does not come with the set, but I thought including it would make the scene more relevant.  He’s a bootleg minifigure from Dargo.

Who remembers the Lego Midi scale Star Destroyer 8099?  I parked it in the back of the shot as an homage to the movie scene.

The Lepin speeder has the same all the same features as the Lego version.  Side doors can be opened by twisting one of the engines either left or right to open the corresponding door.  There is a storage container that slides out.  It has the two projectile shooters with 8 extra red clear disks.  I guess you could store the projectiles inside the storage unit.

I won this set off ebay for a little over $7 USD.  Shipping was free.  These days, I find that if I win stuff off ebay for a really low price, the sellers won’t ship the item, because they’d rather refund my money than sell something too cheaply.   At 7 bucks, I wasn’t expecting this set to arrive.  Arrive, it did and in three weeks which is a lot faster than I expected.

As always, thanks for visiting Its Not Lego and See you next time!